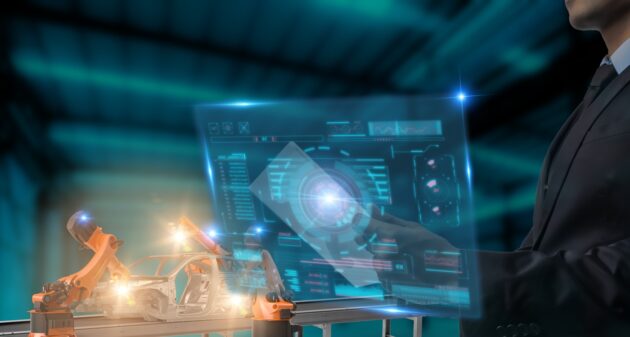 Microcontrollers have long been the low-power processor of choice for IoT applications sitting at the edge of the network. They are perhaps most associated with industrial applications and it is here that the use of Machine Learning (ML) and Artificial Intelligence (AI) is now generating significant interest.

A lot of data is generated at the edge of the network. Increasingly, much of that data is now characterised as sensitive, as it may contain information that could reveal the location of an asset, how long it has been online or how much power it is using. The data may even relate to a specific individual, which could include presence detection, biometric information or even personal records relating to their health. Moving this data between the edge and the cloud now represents a very real threat, in terms of legislation against the misuse of data. A relevant example here would be GDPR (General Data Protection Regulation).

Before the IoT, industrial systems providing automation and control would operate as standalone solutions. These systems were effectively hidden from prying eyes and so held little or no security risk. Fast forward a couple of decades and now all of these systems are connected, and the data they generate has become accessible if left unsecured. As industrial systems become more sophisticated, the value of this data also increases. Moving data between the cloud and the edge represents a significant security threat, often becoming the weakest point on which attackers can focus their efforts.

The idea of edge processing helps reduce the transfer of sensitive data over networks. Edge processing and now the addition of ML and AI at the edge, can increase security but it has other operational benefits, too. Putting more intelligence at the edge, to work on data as and when it is generated, represents a huge change in the direction that the Industrial IoT (IIoT) is developing. It represents a move away from being fully dependent on cloud computing resources and high-speed internet connections, but it does require more processing power to be put into the endpoint.

In order for those endpoints to be entrusted with processing data they must increase their own capabilities. This includes the addition of advanced cryptographical methods to implement measures such as encryption and authentication. There can be no question of malicious attackers finding their way into a network through a poorly defended endpoint. With this in mind, there are several aspects to edge processing that developers should appreciate when embarking on component selection and the design cycle.

One of the major benefits offered by edge processing is the reduced latency it offers. This relates to the round-trip time it would otherwise take data to be sent from the edge to the cloud, processed and return as actionable insights. With this process now taking place on the edge device itself, all aspects of the system must be able to sustain higher operating speeds. This is particularly relevant in real-time systems found in the IIoT.

An inferencing model works with data to provide intelligent results. The accuracy of the model’s results will depend on many aspects, some of which will be the quality and quantity of the data.

This data may take many forms, such as photos or video from an image sensor. However, the same type of information may be gathered using other types of sensors, particularly if the images are only intended to be used by the edge device and not shared with a human observer.

These types of systems might be designed to recognise gestures, for example. In this scenario, low latency would be a key requirement, as people often expect an immediate response. The brain is highly sensitive to latencies in systems, even if the cause of the latency isn’t obvious.

As with many IoT applications, edge processing needs to be conscious of the limited resources available. This often means that power is provided only by batteries, which may need to supply power for several thousand hours before replacement.

This can present another challenge, as AI is typically a compute-intensive activity. New microcontroller architectures coming to market have been developed with this in mind. Low power operation has been a differentiator for manufacturers targeting endpoints for many years, but now AI and ML with edge inferencing is being introduced, those manufacturers need to revisit how they can provide high performance at low power.

Even if the data generated at the edge is not being transmitted back to the cloud, the need for security does not disappear. In fact, it actually increases, as more valuable data and the algorithms used to process it are co-located in the same device.

Technologies like Arm’s TrustZone provide significant enablement in this respect. These technologies create a hard barrier between parts of the system to keep sensitive data more secure. This allows zones to be created, where the system partitions actions between trusted devices and those that are not trusted.

Communication is still an essential function in the IIoT, even if more of the data processing is staying near the edge. There will always be a need to connect an endpoint to the wider network. In the industrial arena many protocols are used, so it is important to combine the system level needs with the capabilities of the hardware and software selected.

When more of the data is stored on the device, the need for secure and reliable memory increases. In the embedded space, on-chip and on-board storage represents a cost and it is often this parameter that needs to be optimised most aggressively.

While deeply embedded memory technologies are evolving, the use of external memory is still common. This often takes the form of removable solid-state media such as an SD card. The balance to be struck here is capacity in relation to security.

The STM32L5 MCU from STMicroelectronics has been developed to provide an optimal balance between performance, security and power consumption. Based on the Arm Cortex-M33 processor, which includes TrustZone technology and ST’s security implementation, it has been developed to meet the needs of smart edge applications.

In order to provide easy access to all of the MCU’s advanced features, Rutronik has developed the RUTDevKit-STM32L5 Edge Intelligence IoT MCU platform. It includes high-speed Analog to Digital Converters to support low latency data conversion, an SDcard slot for storage and support from the Anybus module for connecting the platform to the internet over an industrial bus. It also includes CAN FD and RS485 interfaces and support for PSRAM and NOR flash memory

Putting more intelligence at the edge of the network is a growing trend. It makes good engineering sense to do this, as it keeps network traffic to a minimum and reduces latency for real-time systems.

The breadth of solutions available to engineers developing endpoints in the IIoT is vast, but not all meet the fundamental requirements of edge processing. The RUTDevKit-STM32L5 is a good example of a platform that meets the demand of most engineering teams targeting this application area.