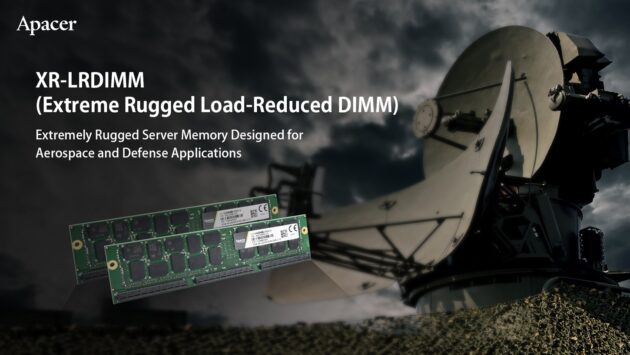 To aid the design of defense projects, Apacer, the world’s leading industrial memory manufacturer, has successfully developed the world’s first anti-vibration server memory for defense applications. It’s called XR-LRDIMM (Extreme Rugged Load-Reduced DIMM), and it features greatly strengthened shock and vibration resistance and reliability. Thanks to its high-end customization strength and deep industry experience, Apacer has a complete range of rugged memory, leading the industry by releasing a series of anti-vibration products such as XR-LRDIMM, XR-DIMM and Rugged SODIMM. Apacer is committed to providing a variety of choices for aerospace, defense and industrial markets that value stability and reliability, and will continue to expand and strengthen its market share in rugged solutions.

Apacer’s XR-LRDIMM is currently the only extremely rugged server memory module with anti-vibration and anti-shock performance on the market. In the past, server systems used in the environments of defense aircraft, naval vessels and armored vehicles had to withstand severe shaking or strong impacts for extended periods, but choices were limited to conventional standard server memory, which was insufficient and unsuitable. The result was that the stability and reliability of key data transmission was often in a high-risk state. Apacer’s XR-LRDIMM features a load-reduced server system, which can provide a niche industrial memory solution with shock resistance, stability and durability for servers that suffer from abnormal operation, data loss or component failure due to vibration.

Unlike the golden finger connector interface used by standard memory, Apacer’s XR-LRDIMM employs an innovative board-to-board connector, which connects to the motherboard through three highly stable 100-pin connectors. The board socket is docked, and supplemented by two mounting holes, which can be firmly connected with the motherboard layer by layer to provide stable high-speed signal transmission quality and prevent the memory module from loosening or displacing due to vibration. For vertical applications such as defense, aerospace and in-vehicle systems that demand shock and vibration resistance, it creates unmatched value.

Find out more products at  www.industrial.apacer.com/en-ww or  Follow us on LinkedIn

NXP Semiconductors N.V. (NASDAQ: NXPI) today announced it is laying the foundation for a new era of Wi-Fi 6 devices...

ROHM has recently held an opening ceremony announcing the completion of a new building at ROHM Apollo’s Chikugo plant to...
Design

SEGGER’s entire portfolio of J-Link software is now available for Linux on ARM, for both 32-bit and 64-bit platforms. This...
T&M

Pico Technology today announced availability of the new PicoScope 4000A Series PC-based oscilloscopes, a second-generation upgrade and expansion of the company’s...