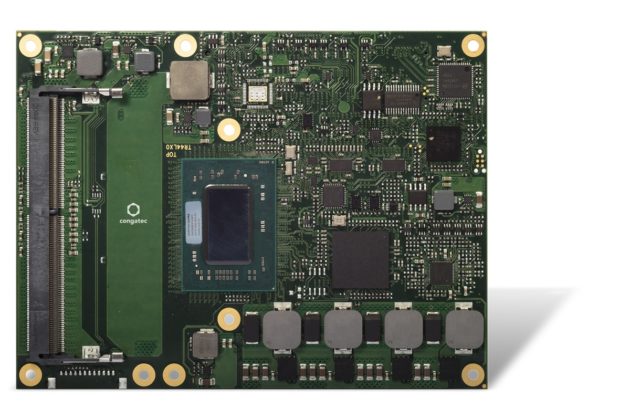 congatec – a leading vendor of embedded computing technology – extends its conga-TR4 series of COM Express modules with processors from the new AMD Ryzen Embedded R1000 series. Based on the acclaimed Zen microarchitecture, this new generation of energy-efficient processors delivers the best low-power computing performance in its class and is optimized for price sensitive markets. Its function set has been slimmed down compared to the AMD Ryzen V1000 processors, yet still offers a range of highly attractive features, including 2 multi-threaded cores, support for three 4k displays with AMD Radeon Vega GPU featuring three compute units. With a TDP that is scalable from 24 to 12 watts and CPU speeds of up to 3.5 GHz, there is massive processing power for individual threads. Featuring an even more impressive graphics performance, the modules are predestined for applications in which OEMs want to emphasize their product quality with ultra immersive graphics.

Target markets for the new COM Express Computer-on-Modules based on the AMD Ryzen Embedded R1000 series include graphic-rich multi-display systems for gaming and digital signage, medical imaging and industrial automation. Another application area is headless systems, where the GPU is used for massively parallel data processing. Examples can be found in communication infrastructures, where the modules are used for security applications or for uCPE, SD-WAN, routers, switches and UTM (Unified Threat Management). With a modular system design based on standardized Computer-on-Modules, users benefit from lower development costs and faster time-to-market thanks to an application-ready computing core. Further advantages are the flexible performance scalability even across processor sockets and generations, and high long-term availability.

The feature set in detail

The new conga-TR4 high-performance modules with COM Express Type 6 pinout are based on the latest AMD Ryzen Embedded R1505G and R1606G multi-core SoCs. They support up to 32 GB energy-efficient and fast dual-channel DDR4 memory with up to 2400 MT/s and optional ECC for maximum data security. The impressively immersive AMD Radeon Vega graphics with 3 compute units supports up to three independent displays with up to 4k UHD resolution and 10-bit HDR, as well as DirectX 12 and OpenGL 4.4 for 3D graphics. The integrated video engine enables hardware-accelerated streaming of HEVC (H.265) video in both directions. Thanks to HSA and OpenCL 2.0 support, deep learning workloads can be assigned to the GPU. In safety-critical applications, the integrated AMD Secure Processor helps with hardware-accelerated RSA, SHA, and AES encryption and decryption.

The new conga-TR4 allows a complete USB-C implementation on the carrier board including USB 3.1 Gen 2 with 10 Gbit/s, Power Delivery and DisplayPort 1.4, for example to connect external touchscreens with a single cable. Further interfaces include 1x PEG 3.0 x4, 3x PCIe Gen 3 and 4x PCIe Gen 2, and 2x SATA Gen 3 as well as 3x USB 3.1 Gen 2, 1x USB 3.1 Gen 1, 8x USB 2.0, and 1x Gbit Ethernet. High Definition Audio and I/Os for SD, SPI, LPC, I²C as well as 2x UART from the CPU and round off the range of interfaces. The supported operating systems include Linux, Yocto 2.0 and Microsoft Windows 10, or optionally Windows 7.

The conga-TR4 COM Express Type 6 Computer-on-Modules can be ordered in the following variants:

More information about the new conga-TR4 COM Express Type 6 Computer-on-Module can be found at: https://www.congatec.com/en/products/com-express-type-6/conga-tr4/

congatec is a rapidly growing technology company focusing on embedded computing products. The high-performance computer modules are used in a wide range of applications and devices in industrial automation, medical technology, transportation, telecommunications and many other verticals. congatec is the global market leader in the computer-on-modules segment with an excellent customer base from start-ups to international blue chip companies. Founded in 2004 and headquartered in Deggendorf, Germany, the company reached sales of 126 million US dollars in 2019. More information is available on our website at www.congatec.com or via LinkedIn, Twitter and YouTube.