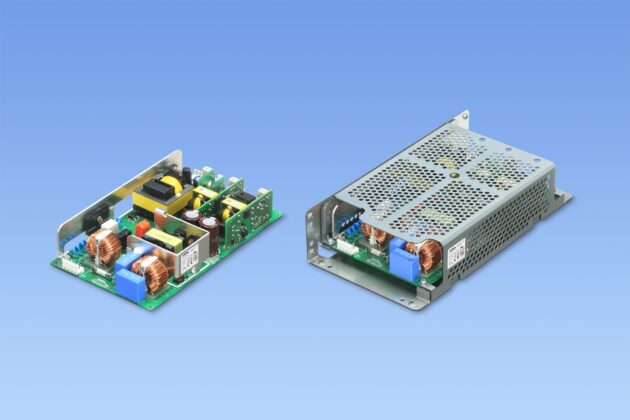 Cosel Co, Ltd (6905: Tokyo) today announced the expansion of its leading RB series, designed for mid-size robotics and factory automation, with the addition of a 300W version. The RBC300F is an open-frame, configurable AC/DC power supply with triple outputs tailored for robotic controllers and factory automation. Based on a unique concept, the Cosel RBC300F series offers three configurable isolated outputs, with one having a reinforced isolation to power Intelligent Gate Bipolar Transistors (IGBT) or equivalent applications. Certified to EN62477-1 Over Voltage Category (OVC) III, by reducing the need for an extra isolation transformer when connected to a distribution panel, the RBC300F power supply simplifies the design process for systems architects while reducing costs. The RBC300F benefits from built-in digital control in the primary and an option featuring extended UART communication interface for control, monitoring and sequencing.

Applications in robotics control are often powered by 24V or 48V bus voltage. In such applications the distribution bus might be subject to repetitive peak energy demand, requiring the power supply to sustain such load conditions. The RBC300F 24V and 48V output modules have been designed to operate efficiently in peak load conditions and can sustain up to 150% peak current.

The reinforced isolation of output three is suitable to supply voltages to IGBTs or IPMs, which reduces the number of power supplies required to power robotic controllers. By integrating a reinforced isolated output, the ‘three in one’ RBC300F has an equivalent footprint 40% lower than conventional solutions.

To optimize efficiency, the master output DC/DC converter is based on an LLC resonant topology when the second and third outputs are using Quasi-Resonant-Flyback topology.

The product is designed for convection cooling and can be operated from -20 to +70 degrees centigrade. Depending on the final equipment assembling and cooling conditions, a derating may apply.

For extended flexibility the RBC300F option (I3) features an Extended-UART (Universal asynchronous receiver-transmitter) digital interface supporting 49 commands for monitoring, controlling and sequencing. Operating data can be stored and locked inside the internal memory, and recorded error codes can be used for analysis and the recording of operational hours for preventive maintenance.

The RBC300F has a five-year warranty.

Established in Japan 1969, COSEL is one of the world’s leading designers and manufacturers of high performance AC-DC Power Supplies, DC-DC Converters and EMI Filters. With quality, reliability & flexibility as our main focus, we pride ourselves on developing some of the highest quality and most reliable products seen anywhere in the world today. The Cosel Group is a $253m global company employing some 810 staff with sales offices throughout Japan, Asia, Europe and North America. Our product range is aimed mostly at demanding applications within the Industrial, Factory Automation, Medical, Telecoms, Lighting, Audio/Broadcast & Renewable Energy sectors. A flexible approach with full in-house design means we deliver products using the very latest technology meeting the growing demands of our customers.