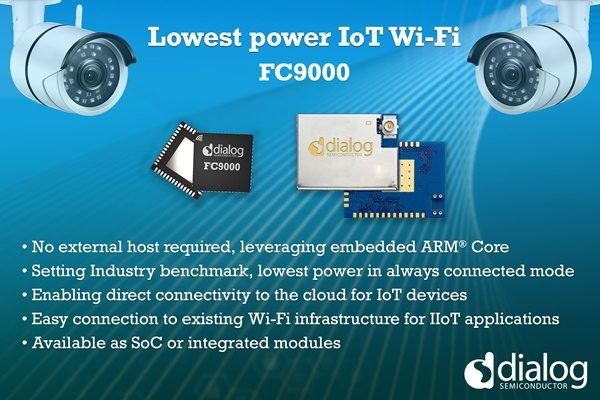 Dialog Semiconductor plc (XETRA:DLG), a provider of highly integrated power management, AC/DC power conversion, audio, charging and Bluetooth® low energy technology, today has introduced the FC9000. This will be Dialog’s first Wi-Fi SoC to be released since the closing of the acquisition of Silicon Motion’s  Mobile Communications product line on May 31, 2019. The FC9000 is targeted at battery-powered IoT devices such as smart door locks, video monitoring systems, smart thermostats, and wireless sensors enabling direct connectivity to Wi-Fi networks, while typically supporting a battery power lifetime greater than one year.

Previously, devices running on Zigbee, ZWave or Bluetooth standards needed to be paired with an expensive and cumbersome gateway or smartphone to enable connectivity to the cloud, adding complexity and unnecessary costs for IoT adoption. The introduction of the FC9000 overcomes these issues as we move towards a Wi-Fi ubiquitous world.

“The FC9000, the first product in our new VirtualZero™product line, complements our existing portfolio of leading Bluetooth low energy SoC’s for connected devices and represents our next IoT connectivity innovation to pass on to our customers,” said Sean McGrath, Senior VP & GM of Dialog Semiconductor’s Connectivity and  Audio  Business Group. “This Wi-Fi device is the first in a series that we plan to launch which solves major pain points for both manufacturers and end-users around IoT network compatibility and power consumption.”

The FC9000’s proprietary power-saving algorithms set a new industry power benchmark, which allows it to operate on just a few microamps, increasing overall battery life for end-devices. Venstar, a leading energy management system supplier and one of the largest global thermostat suppliers, is utilizing the FC9000.

“Thanks to Dialog’s new SoC, our customers are enjoying a more efficient, reliable Wi-Fi sensor and over a year of battery life,” said Steve Dushane, CEO, Venstar. “Being first to market with this technology is giving us a significant competitive advantage.”

The SoC also features a separate hardware accelerated encryption engine that increases the speed of Wi-Fi encryption, such as WPA2-Enterprise and Personal. This support also extends to higher layer commercial grade security encryption, such as TLS, for enabling HTTPs, the modern standard for website security.

The FC9000 is a full offload system for Wi-Fi networking, running the end device’s application code alongside its own. It does not require an external network processor or microcontroller but can operate alongside a microcontroller if desired. The SDK included with the device allows for rapid design implementation with a generous provision of 1.6MB of SRAM on-board memory.

The FC9000 SoC is in volume production today and available as an SoC or integrated module. Both are Wi-Fi Certified. The modules are FCC, IC, and CE certified for worldwide operation.