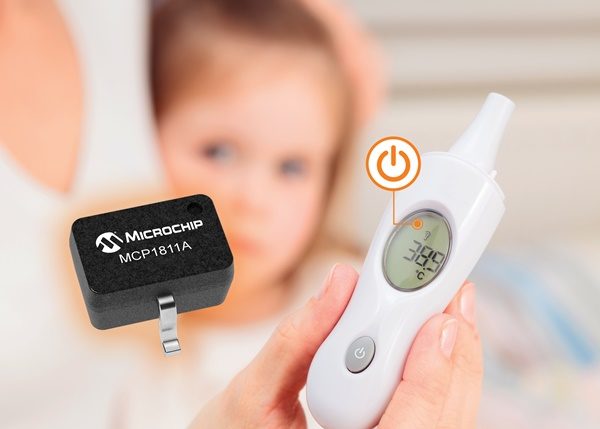 Microchip announces a linear Low Dropout (LDO) regulator that extends battery life in portable devices up to four times longer than traditional ultra-low quiescent (Iq) LDOs. With an ultra-low Iq of 250 nanoamps (nA) versus the approximate 1 uA operation of traditional devices, the MCP1811 LDO reduces quiescent current to save battery life, enabling end-users to recharge or replace batteries less often. The minimised power consumption enables portable electronic devices to run for months or even years on a single battery.

Ideal for IoT and battery-operated applications such as wearables, remotes and hearing aids, the 250 nA ultra-low Iq reduces power consumption in applications by minimising standby or shutdown current. Reducing standby power consumption is critical in remote, battery-powered sensor nodes, where battery replacement is difficult and operating life requirements are high. Available in package options as small as 1 x 1 millimeter (mm), the MCP1811 consumes minimal board space to meet the needs of today’s compact portable electronic designs. Depending on the application and number of LDOs, designers can take advantage of the extra board space with a larger battery to further increase battery life.

An additional benefit offered by the MCP1811 is faster load line and transient response when compared to other ultra-low Iq LDOs. Faster response times can accelerate wake-up speed in devices such as monitors or sensors that require immediate attention. Faster transient response can help designers to avoid undervoltage and overvoltage lockout measures used in sensitive applications where transient spikes can result it catastrophic results.

The MCP1811 is available today for sampling and in volume production in packages down to a 1 x 1 mm DFN.

The Microchip name and logo, and the Microchip logo, are registered trademarks of Microchip Technology Incorporated in the U.S.A. and other countries. All other trademarks mentioned herein are the property of their respective companies.