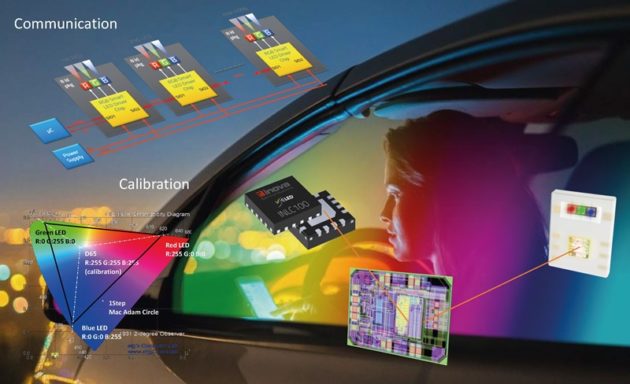 Inova will be presenting the first available products and applications based on ISELED technology at ISAL 2019. A “Carbox” demonstrator illustrates, among other things, the interaction between dynamic light and image content. This opens up new possibilities for driver assistance and infotainment systems. A matrix light demo based on the digital ISELED LEDs will be presented as well as “digital LEDs” from various manufacturers, standalone drivers and development kits (ADK) for a simple, flexible and rapid ISELED design implementation.

The ISELED concept
Originally designed for dynamic ambient lighting indoors – where a large number of RGB LEDs on a light strip can be individually controlled by a local controller – the ISELED concept is constantly opening up new areas of application. After outdoor lighting and dynamic backlight display, a new fieldbus is also under development. The ILaS (ISELED Light and Sensor) network will expand the capabilities of the current ISELED protocol so that not only LEDs, but also sensors and actuators in almost any number and combination can be controlled in the future.

The ISELED concept integrates a dedicated microcontroller together with LEDs in a highly compact package. The controller contains the correction data for the individual colour LEDs, thus eliminating the time-consuming ‘binning’ required up to now. Binning is a process by which LEDs are sorted according to their slightly different manufacturing properties in order to avoid visible differences in colour and brightness in the application. This aspect is becoming ever more important with the increasing number of LEDs in vehicles that require the use of uniform LED components. ISELED can also be used to readjust the LEDs, taking into account the temperature variation and ageing during operation. The correction data are determined by the manufacturer during the final test of the RGB LED and stored directly on the controller chip. The digital RGB LEDs can thus be operated with an optimised protocol without the previous overhead. A further boost for ISELED technology comes from automated/autonomous driving, where, in addition to displays, light will increasingly be used to transmit information and warnings.

A far-reaching development environment and the support of industrial partners are an essential prerequisite for the success of a new trend-setting technology. Against this background, the ISELED Alliance was created. This alliance is an open industrial alliance with the objective of developing a comprehensive ecosystem – i.e. a complete system solution for innovative automotive lighting – based on ISELED technology. Currently (as of August 2019), 23 companies/institutions support ISELED technology within the alliance. The spectrum ranges from semiconductor manufacturers and lighting/design specialists to major Tier 1 automotive suppliers. This covers the entire value chain in order to establish ISELED as a standard solution.