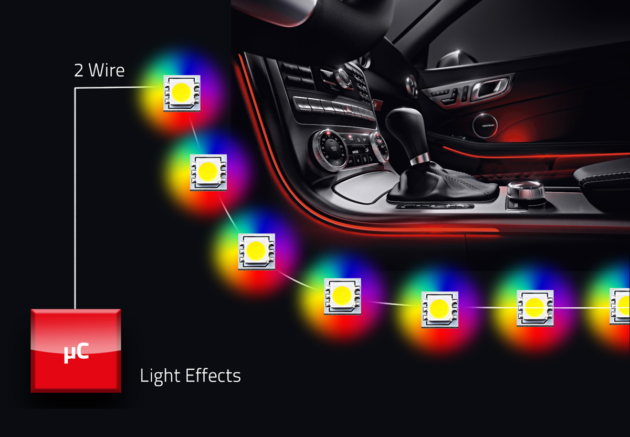 In addition to its LED driver/controller die, integrated in smart ISELED LED modules, Inova Semiconductors offers the driver chip as a standalone solution. The standalone ISELED driver is now available in volume production and is AEC-Q100 qualified. The INLC10AQ (originally introduced as INLC100Q16) will be used to construct custom LED chains that can be controlled via a bidirectional two-wire differential bus, enabling up to 4079 daisy-chained LED driver & controller devices in a single array. Additionally, smart LED modules integrating both the driver & controller and RGB LEDs in one single package are available from different vendors both in high volume and automotive qualified. Both the integrated LED modules and the standalone solution enable innovative solutions in ambient lighting, roof lighting, display backlight and functional lighting.

The Inova INLC10AQ is very flexible, intuitive and easy to program, providing functions such as color/brightness control and low light dimming support. It supports calibration of an LED’s brightness, while the dominant wavelength provides temperature compensation for red LEDs and features a built-in one-time programmable (OTP) memory for storing calibration and compensation data values, which abolishes the need for LED binning. Developed with design simplicity in mind, the driver & controller chip includes a built-in oscillator, thus eliminating the need for additional external components. It only requires a single supply voltage and also integrates a built-in LDO (low dropout regulator), a temperature sensor, and comprehensive diagnostic features.

LED chains can be built up by daisy-chaining several INLC10AQ devices or other ISELED products via a differential bidirectional serial bus with 2 Mbps and CRC (Cyclic Redundancy Check). The chip provides three independent, constant current sinks, each controlled via PWM (488 Hz, 12 bit). In an LED chain, each device is individually addressable via the serial bus, using a proprietary bus protocol.

When implementing daisy chained INLC10AQ devices, the communication between the microcontroller and the first device is single ended. The INLC10AQ can also be used as a converter that is placed near the microcontroller. The device then converts the single ended signal to a differential signal, connecting to the first LED in the chain. The converter device can also be combined with other authenticated ISELED products that contain the INLC10AQ controller and RGB LEDs in one single package.

Besides the usage to drive smart LEDs, the outputs to 3 LEDs can also be used with a built in ADC which can sense the applied voltage at the pins. This allows the connection of simple sensors (e.g. proximity, touch, pressure) or knobs to the LED chain and then transfers the data via the ISELED bus back to the controller, thus avoiding additional wiring for the sensors.

The INLC10AQ is a mixed signal device in a 16-lead, WETQFN package, measuring just 3mm x 3mm x 0.9mm. The broad operating temperature range is specified from -40°C to 105°C and the device has been qualified in accordance with the AEC-Q100 automotive test specifications.

ISELED (Intelligent Smart Embedded LED) is an innovative technology based on highly integrated smart LED modules enabling dynamic ambient and functional lighting solutions. Differing from the conventional approach, which uses standard RGB modules, ISELED significantly simplifies color design and connectivity at lowest system costs due to fully calibrated LEDs and no necessary binning. The concept is based on calibrated, digitally addressable, smart RGB LED modules with an integrated smart LED driver & controller, connected by a 2 Mbit/s serial daisy-chain bus. With ISELED and its software protocol up to 4079 LEDs can be connected and individually controlled. The ISELED Alliance – a group of leading companies in the Automotive lighting market – is dedicated to provide the complete ISELED technology portfolio worldwide. More information at: https://iseled.com/

Inova Semiconductors GmbH is a fabless semiconductor manufacturer headquartered in Munich, Germany. The company was founded in 1999 and specializes in the development of state-of-the-art products for Gigabit/s serial data communication. Besides its successful APIX (Automotive Pixel Link) products, sold in very high volume and now in their third generation, Inova offers innovative technology solutions for LED lighting in automobiles and other industries based on the ISELED technology. Inova Semiconductor’s IC products are manufactured at leading foundries in Asia and sold through a worldwide sales network. More information: https://inova-semiconductors.de

Pickering Electronics, the reed relay company which has pioneered miniaturization and high performance for over 50 years, has announced that...
Display