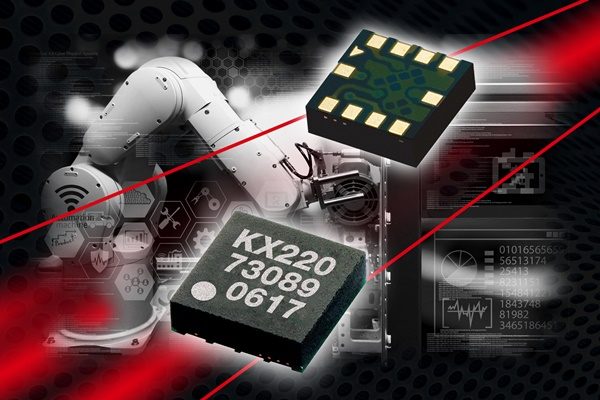 Kionix , a ROHM group company, is pleased to announce the release of the KX220 sensor series, a new family of medium-g, tri-axis Analog Accelerometers. Initially two versions are available: the KX220-1071 and the KX220-1072, providing +/-20g and +/-40g ranges respectively. Maximum supported bandwidths range from 4.5kHz to 8kHz. Both sensors have built-in self-test functions, consume only 0.25mA at 3.3V and are delivered in 10-pin 3mm x 3mm LGA packages.

“The fast pace of digital sensor technologies in the consumer space is well known,” states Nader Sadrzadeh, CEO of Kionix. “However, industrial companies are now recognizing the benefits of these technologies and are accelerating their investment in them to bring greater efficiency, lower costs, and improved operations. But unlike the consumer market, with its short upgrade cycles, it often doesn’t make sense in the industrial sector to cast aside existing infrastructure and directly upgrade to digital solutions due to the significant capital already invested, the long lifetimes of equipment, and the need to ensure continuity.  So although digital rules in the consumer world, analog is still very alive and often preferred in industrial applications. Recognizing this need, Kionix is complementing its high bandwidth, medium-g digital offerings with the addition of the KX220 series of analog accelerometers.”

Since the typical applications of industrial sensors are monitoring machines and physical processes, the g-range and bandwidth requirements are typically higher than those in hand held consumer devices. These sensors are targeted to assist in applications ranging from vibration monitoring to shock and impact detection and measurement. Markets served are Machine Health and Diagnostic Monitoring, Robotics and Automation, and Manufacturing Process Control.