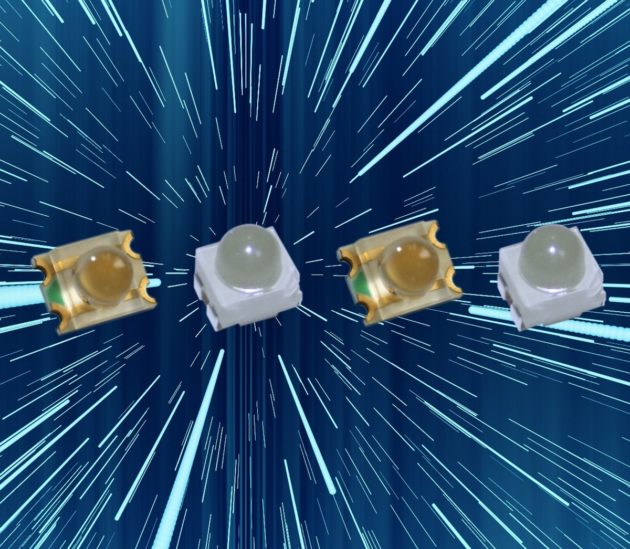 OMC, the pioneer in optoelectronics design & manufacture, has introduced two new surface-mount LEDs, an ultra-narrow 15 degree beam LED and a 60 degree beam LED.  Both new LEDs are produced by OMC in a range of package styles, beam angles and all popular LED wavelengths, plus infra-red versions. The two new devices join the SMD emitter series launched by OMC in late 2018, which includes a 30 degree output beam device that has proved very popular.

The two new SMT LEDs provide designers with even greater choice and flexibility for a very wide range of applications, including signalling, indication, sensing and communications applications.

Narrow beam angle LEDS are often challenging for designers to source with the move to surface-mount components. This wasn’t so much of a problem with traditional through-hole (non-surface-mount) LEDs, which are commonly produced with narrow output angles as the LED body is generally moulded around the leadframe using an optical epoxy or silicone. The LED body itself then acts as the lens, focusing the light into beam angles as narrow as 5 degrees.  However, with the move to surface-mount components, some design versatility was lost.  With SMT LEDs, the LED body is generally injection moulded from non-optical material which is pre-manufactured before the LED die is mounted, and therefore doesn’t form a lens in the same way. As a result, the majority of SMD packages do not incorporate any lensing, emitting light in a wide beam angle which generally exceeds 100°.  OMC, however, uses a proprietary post die-mount encapsulation process and is able to cost-effectively integrate narrow angle lensing into a range of surface-mount emitters.

The new narrow 15 degree angle and the 60 degree angle SMT LEDs open up design possibilities for engineers needing to provide a clear human-machine interface and ensure precision and accuracy.  They are especially targeted at high-intensity applications where the beam needs to be seen from a distance, such as signalling, indication, sensing and communication.

OMC’s Commercial Director, William Heath comments: “The 30 degree angle SMT LED we launched last autumn has proved extremely popular, and these two new 15 degree and 60 degree additions to the range further expand the choice available for engineers. As well as a wide range of standard devices, we offer a customisation service and can produce SMT LEDs with any wavelength or other light characteristics a customer may require.”