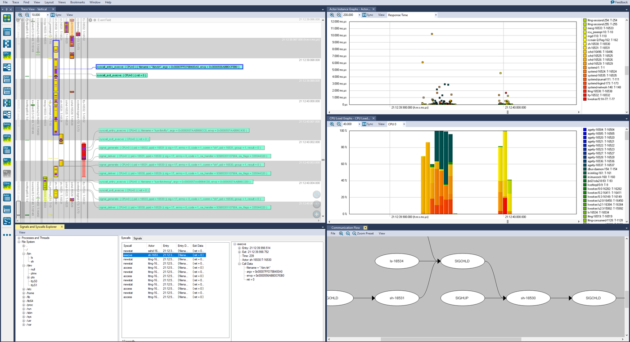 Percepio Tracealyzer gives a new level of insight during software debugging and verification at system level by enabling visual top-down exploratory analysis. This makes it easy for developers to spot issues, also during full system testing, and drill down into the details to find the cause. The new version adds several views optimized for Linux tracing to the vast set of visualizations already present in Tracealyzer, and leverages CTF, the Common Trace Format, and the widely supported LTTng open source tracing framework. New features for Linux include:

Percepio CEO and founder Dr. Johan Kraft comments: “Percepio Tracealyzer is firmly established as the leading solution for visual trace diagnostics in the RTOS space. Linux is the single largest platform for embedded and IoT systems today and has an even greater need for better debugging support at system level. We are therefore thrilled to release an even better version of Tracealyzer that is now also optimized for the needs of embedded Linux developers.”

Other notable improvements for Linux developers in Tracealyzer 4.4 include:

Percepio is the leading provider of visual trace diagnostics for embedded and IoT software systems, during development and in the field. Percepio Tracealyzer, which can be viewed as a surveillance camera for embedded software, allows users to visually spot and analyze issues in software recordings during development and testing. Percepio DevAlert is a cloud service for deployed IoT devices combining automatic error reporting with visual trace diagnostics, powered by Tracealyzer. This provides a DevOps-style feedback loop from IoT device to developer, speeding up awareness and resolution of any remaining software issues during field testing or customer use.

Percepio collaborates with several leading vendors of operating systems for embedded software and is partnering with Cypress, an Infineon Technologies company, NXP, STMicroelectronics, Renesas, and Wind River. The company is also a member of the Amazon Web Services Partner Network. The company was founded in 2009 as a spin-off from applied research at Mälardalen University and is based in Västerås, Sweden. For more information, visit percepio.com.