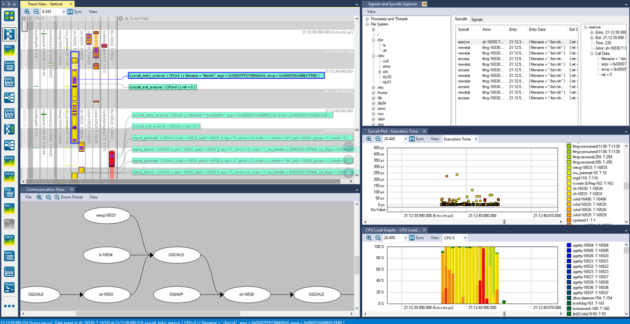 Percepio, the leader in visual trace diagnostics for embedded systems and IoT, announces an open beta test program for the upcoming Tracealyzer version 4.4, which provides much improved support for visualization and analysis of embedded Linux® software, packaged in an intuitive and modern user interface. The beta program runs until 1 August 2020, and anyone interested in participating can download Tracealyzer with embedded Linux support from percepio.com now. A free 45-day evaluation license is included in the program and all participants also qualify for exclusive discounted offers on Tracealyzer licenses up until 1 August.

Tracealyzer 4.4 with Linux tracing support transforms low-level trace data into a rich set of overviews enabling top-down exploratory analysis, making it easy to spot anomalies and drill down to see the details. This avoids many hours of frustrating guesswork, providing faster solutions and a much higher level of confidence during debugging, verification and performance optimization.

Percepio CEO and founder Dr. Johan Kraft comments: “There is a tremendous potential to improve embedded software development via better insight into the runtime system, especially for complex software systems based on Linux. For embedded application developers to really benefit from software tracing in everyday development, proper tools for visual trace diagnostics are key as these tools allow developers to quickly make sense of large software traces, identify bugs and verify solutions.

We’ve developed Tracealyzer to make visual trace diagnostics simple and a natural part of everyday development, yet also allowing for more advanced analyses of application-specific concerns. Tracealyzer has been very appreciated among RTOS software developers and we are thrilled to now offer an even better Tracealyzer for embedded Linux developers.”

The beta program is open now and will be available until 1 August 2020. To participate in the beta test, download Tracealyzer with embedded Linux support from percepio.com. Tracealyzer 4.4 will be released in Q3, 2020.

Percepio is the leading provider of visual trace diagnostics for embedded and IoT software systems, during development and in the field. Percepio collaborates with several leading vendors of operating systems for embedded software and is partnering with NXP, STMicroelectronics, Renesas, and Wind River. The company is also a member of the Amazon Web Services Partner Network. Percepio was founded in 2009 and is based in Västerås, Sweden. For more information, visit percepio.com.