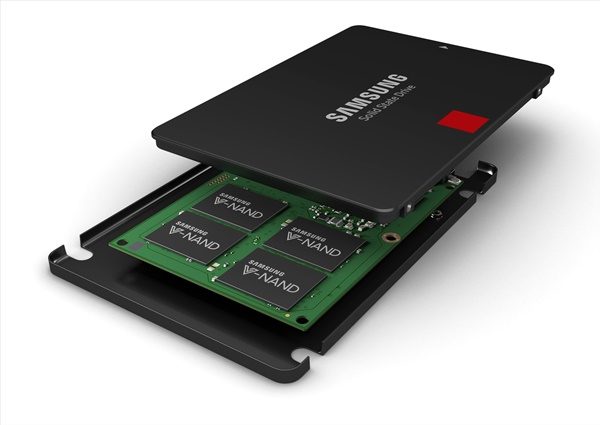 The new SSDs are available in two series: the PRO series, which targets use with high-end and enterprise computing devices; and the EVO series, which has been specially designed for general consumer computing applications.

The 860 PRO drives have been designed to achieve highly sustainable and dependable performance and handle heavy daily data-transfer workloads. Based on Samsung’s latest 64-layer 2-bit V-NAND architecture, the series also comes equipped with the company’s newly designed MJX controller to deliver best-in-class sequential read and write speeds: up to 560 and 530 megabytes per second (MB/s) performance, respectively. This level of performance starts to approach the theoretical bandwidth limitation of 600MB/s for the legacy Serial-ATA (SATA) interface, which many SSD manufacturers have tried to reach over the years.

The series also offers guaranteed endurance and high reliability with the industry’s highest rating of 4800TB Total Bytes Written (TBW) – in compliance with JESD218 standards – which is approximately eight times higher than the predecessor 850 PRO series.

The SSD 860 EVO series targets use with mainstream desktops and laptops. Like the PRO, it comes equipped with the newly designed MJX controller but is also the world’s first line of consumer SSDs to feature the manufacturer’s 3-bit V-NAND MLC technology. The 860 EVO delivers excellent sequential read and write performance – up to 550MB/s and 520MB/s speeds, respectively, along with highly sustainable performance for everyday computing applications. The 860 EVO series also delivers a TBW rating of up to 2400TB, which is up to six times higher than the 850 EVO series.

In addition, to meet the need for ever-faster data transfers and high performance over longer periods of time, the 860 EVO series integrates Samsung’s Intelligent TurboWrite technology, which automatically decides how much space to allocate to the TurboWrite region in accordance with system workload. This enables the 860 EVO to provide significantly accelerated write performance that is up to six times longer than the previous version of TurboWrite, which was integrated into the 850 EVO series.

Available in a wide range of memory capacities, the SSD 860 PRO and EVO series of SSDs from Samsung are shipping now from RS in the EMEA and Asia Pacific regions.

About RS Components
RS Components and Allied Electronics & Automation are the trading brands of Electrocomponents plc, the global distributor for engineers. We offer more than 500,000 industrial and electronic products, sourced from 2,500 leading suppliers, and provide a wide range of value-added services to over one million customers. With operations in 32 countries, we trade through multiple channels and ship around 50,000 parcels a day.

Electrocomponents is listed on the London Stock Exchange and in the last financial year ended 31 March 2017 had revenues of £1.51bn.

For more information, please visit the website at http://www.rs-online.com.