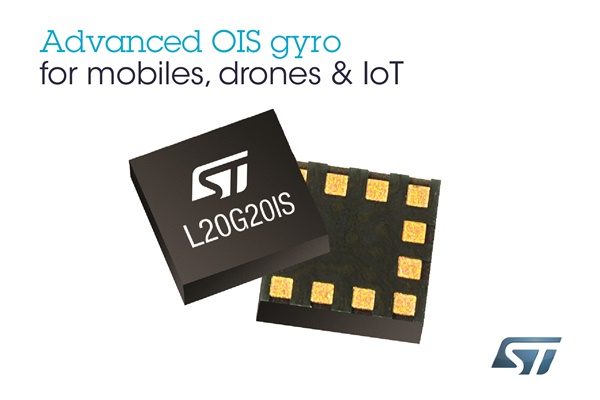 The L20G20IS maintains its extreme accuracy even when soldered on the latest ultra-thin substrates, which are typically only 0.2mm or 0.3mm thick and increasingly used by handset designers to create new super-slim and flat cases with no “camera bump.” By eliminating the effects of substrate deformation as the smartphone is moved, the L20G20IS keeps the Zero-Rate Level (ZRL) within specification to ensure consistent measurements for image stabilization.

Overall noise performance is also significantly enhanced, with rate noise density (RND) of 3.8mdps/√Hz, configurable phase delay down to 1° at 20Hz, and typical ZRL of ±5dps, all contributing to crisper photos from smartphone cameras. At up to ±200dps, the full-scale range is undiminished, while sensitivity and temperature stability are both improved. An integrated temperature sensor ensures best-in-class compensation, to help users capture sharp images even with long exposure times.

Among other improvements coming from ST’s state-of-the-art MEMS-device capabilities, the L20G20IS boots in less than 70ms, up 30% faster than the L2G2IS, and draws less than half the current by operating at just 1.4mA.

There are also power-down and sleep modes, which allow smart-camera software to save even more battery energy.

[1] MEMS: Micro-Electro-Mechanical Systems: ST is a world leader in MEMS devices for mobile applications, with more than 900 MEMS-related patents and patent applications worldwide.