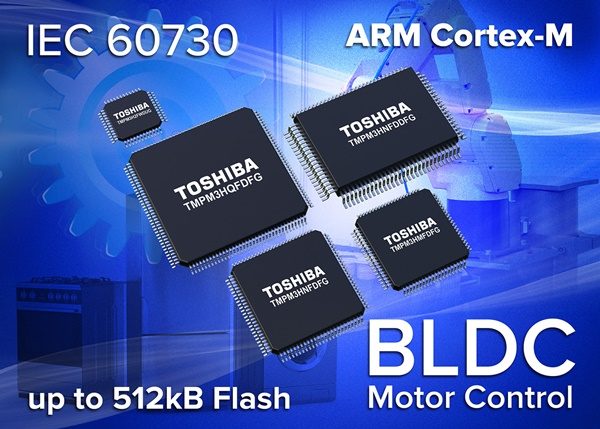 Toshiba Electronics Europe (TEE) today announced the launch of the second M3H group in the TXZ™ family of low-power, high-speed microcontrollers based on the Arm® Cortex®-M3 core.

Toshiba launched the first M3H Group with 30 products for consumer and industrial device applications in May 2016, as the first group in the TXZ family. The newly launched second M3H group is again based on the de facto industry standard Arm Cortex-M3 core for embedded systems and offers greater performance than the first group.

The new M3H-devices incorporate high-performance analog circuits and the wide range of basic functions required to support comprehensive motor control for applications in consumer and industrial devices. The line-up includes a range of 64 to 144-pin packages, 256 to 512KB of flash memory, and 32KB data flash memory.

The operating frequency is 80MHz, twice the speed of the first M3H group. Integrated features include high-precision analog circuits such as a 12-bit ADC converter with 1.5μs conversion speed with up-to 21 channels, and an 8-bit, 2 channel, DAC.

In addition there is a built-in self-diagnosis function that checks the reference voltage in the ADC, a RAM parity function to detect errors during memory reads, and a single channel CRC calculation circuit that contributes to reducing software processing loads to comply with the IEC 60730 functional safety standard.

Toshiba plans to release groups of microcontrollers for high-speed data processing communication control and devices equipped with high-precision analog circuits for low- to medium-speed motor control. Toshiba continues to expand the line-up of the TXZ family to meet the needs of the motor control and global sensing market.

The mass production is scheduled to start now.

* Arm and Cortex are registered trademarks of Arm Limited (or its subsidiaries) in the US and/or elsewhere.

* TXZ is a trademark of Toshiba Corporation.

Intelliconnect (Europe) Ltd the UK based specialist manufacturer of RF, waterproof and cryogenic connectors and cable harness assemblies has developed...