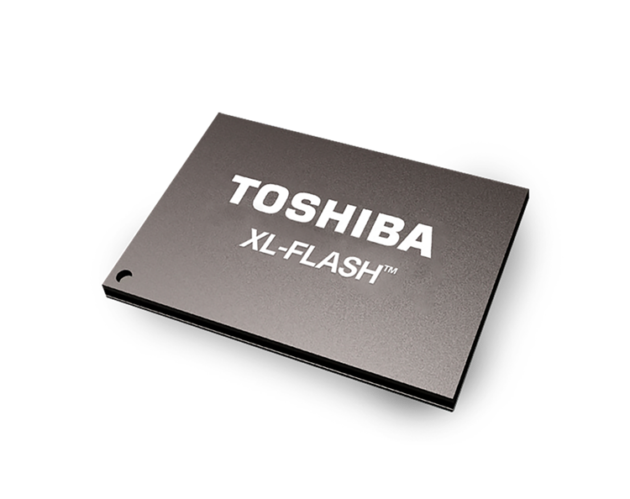 Classified as SCM (or persistent memory), with the ability to retain its contents similar to NAND flash memory, XL-FLASH bridges the performance gap that exists between DRAM and NAND. While volatile memory solutions such as DRAM provide the access speed needed by demanding applications, that performance comes at a high cost. As the cost-per-bit and scalability of DRAM levels off, this new SCM layer in the memory hierarchy addresses that issue with a high density, cost effective, non-volatile NAND flash memory solution. Poised for growth, industry analyst firm IDC estimates the SCM market will reach in excess of $3B in 2022[1].

Sitting in between DRAM and NAND flash, XL-FLASH brings increased speed, reduced latency and higher storage capacities – at a lower cost than traditional DRAM. XL-FLASH will initially be deployed in an SSD format but could be expanded to memory channel attached devices that sit on the DRAM bus, such as future industry standard non-volatile dual in-line memory modules (NVDIMMs).

As the inventor of NAND flash, as well as being the first company to announce 3D flash memory technology and a leader in process migrations, Toshiba Memory is ideally positioned to deliver SLC-based SCM with mature manufacturing, proven scalability and time-tested SLC reliability.

“XL-FLASH is the highest performing NAND available, thanks to our BiCS FLASH – used in SLC mode,” noted Axel Stoermann, Vice President, Toshiba Memory Europe GmbH. “By only storing one-bit per cell, we’re able to greatly increase performance. And, because XL-FLASH is based on proven technologies that we already mass produce, our customers will be able to accelerate time to market with adoption of XL-FLASH as a Storage Class Memory solution.”

Sample shipments will start in September 2019, with mass production expected to begin in 2020.

[2] When compared to TMC’s TLC NAND which has a read latency of approximately 50 microseconds.

Highest performing NAND available claim based on the fact that the die has been specifically designed (16 planes) to provide higher performance than TLC NAND.

All company names, product names and service names may be trademarks of their respective companies.

In every mention of a Toshiba Memory product: Product density is identified based on the density of memory chip(s) within the Product, not the amount of memory capacity available for data storage by the end user. Consumer-usable capacity will be less due to overhead data areas, formatting, bad blocks, and other constraints, and may also vary based on the host device and application. For details, please refer to applicable product specifications. The definition of 1Gb = 2^30 bits = 1,073,741,824 bits. The definition of 1GB = 2^30 bytes = 1,073,741,824 bytes. The definition of 1KB = 2^10 bytes = 1,024 bytes.

For more information on the full range of our memory and SSD products please visit: business.toshiba-memory.com

Intelliconnect (Europe) Ltd the UK based specialist manufacturer of RF, waterproof and cryogenic connectors and cable harness assemblies has developed...