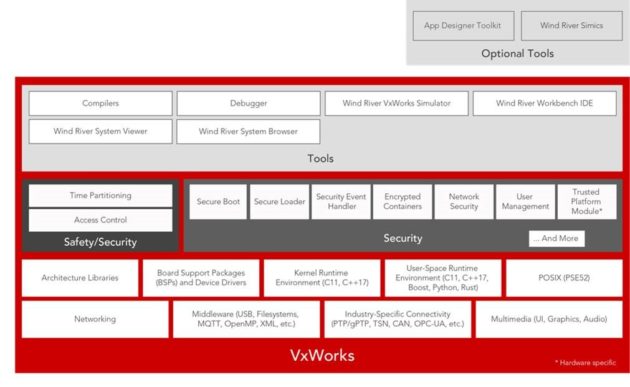 Wind River®, a global leader in delivering software to the intelligent edge, today announced the latest release of its industry-leading real-time operating system (RTOS) VxWorks®, which has been enabling the security, safety, and deterministic performance of embedded applications for more than 30 years. Over these three-plus decades, VxWorks has continually evolved to meet the changing needs of software developers. The latest release redefines embedded software development with new capabilities and industry firsts to drive greater business value, innovation, and productivity.

As the industry rapidly adapts to address the automated to autonomous transformation, and to attract a new generation of developers trained with cloud-native skills, there’s demand for a more modern development approach that enables engineers to use today’s mainstream tools and programming languages for innovating. VxWorks now empowers developers of all backgrounds with popular programming languages and libraries, along with cloud-based development tools and infrastructures to create a new era of mission-critical applications that require the highest levels of security and safety.

Bringing the ease of desktop, enterprise, and cloud-native development to embedded, the latest release of VxWorks includes the following:

“Next generation design goals for autonomous and intelligent systems require new technologies for optimized development,” said Chris Rommel, executive vice president, VDC Research. “Just as important, however, is the need to align development platforms with the evolving skillsets of today’s engineers. Building on its long-established foundation serving mission-critical systems, Wind River’s new release of VxWorks addresses both of these issues for next generation system development.”

More information on the latest release of VxWorks is available at www.windriver.com/announces/vxworks.

Wind River is uniquely positioned with its comprehensive software portfolio that supports a diverse range of developer journeys from design to development to deployment, whether teams want to start with open source and need Linux, or an RTOS, or both. This flexibility allows companies to deliver innovative products that leverage the latest community-driven innovations while meeting the safety, security, and reliability requirements for mission-critical applications.

Wind River is a trademark or registered trademark of Wind River Systems, Inc., and its affiliates. Other names may be the trademarks of their respective owners.