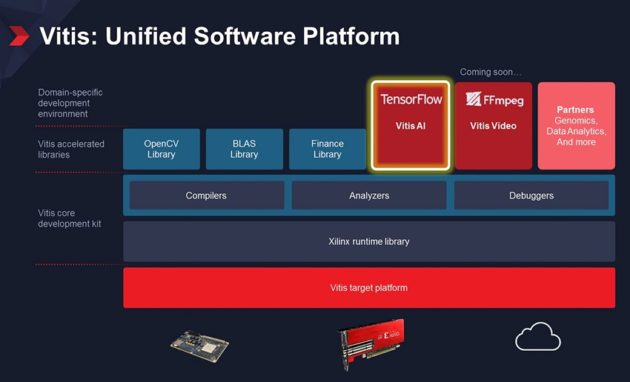 Xilinx, Inc. (NASDAQ: XLNX), the leader in adaptive and intelligent computing, today announced Vitis™ (pronounced Vī-tis), a unified software platform that enables a broad new range of developers – including software engineers and AI scientists – to take advantage of the power of hardware adaptability. Five years and a total of 1,000 man years in the making, the Vitis unified software platform automatically tailors the Xilinx hardware architecture to the software or algorithmic code without the need for hardware expertise. Rather than imposing a proprietary development environment, the Vitis platform plugs into common software developer tools and utilizes a rich set of optimized open source libraries, enabling developers to focus on their algorithms. Vitis is separate to the Vivado™ Design Suite, which will still be supported for those who want to program using hardware code, but Vitis can also boost the productivity of hardware developers by packaging hardware modules as software-callable functions.

With exponentially increasing compute needs, engineers and scientists are often limited by the fixed nature of silicon,” said Victor Peng, president and chief executive officer, Xilinx. “Xilinx has created a singular environment that enables programmers and engineers from all disciplines to co-develop and optimize both their hardware and software, using the tools and frameworks they already know and understand. This means that they can adapt their hardware architecture to their application without the need for new silicon.”

The Vitis platform is built on a stack-based architecture that plugs seamlessly into open-source standard development systems and build environments, but most importantly, it includes a rich set of standard libraries.

The base layer is the Vitis target platform, which includes a board and preprogrammed I/O. The second layer, called the Vitis core development kit, encompasses the open-source Xilinx runtime library to manage the data movement between different domains, including the subsystems, the AI Engine in the forthcoming Versal ACAP™, as well as an external host, if required. This layer also includes the core development tools such as compilers, analyzers and debuggers. While Xilinx provides a world-class design environment, these tools are designed to integrate seamlessly with industry-standard build systems and development environments.

The fourth and most game-changing element of the platform is Vitis AI, which integrates a domain-specific architecture (DSA). The DSA configures Xilinx hardware to be optimized and programmed using industry-leading frameworks like TensorFlow and Caffe. Vitis AI provides the tools to optimize, compress and compile trained AI models running on a Xilinx device in about one minute. It also delivers specialized APIs for deployment from edge to cloud, all with best-in-class inference performance and efficiency. Xilinx will soon be releasing another DSA, called Vitis Video, to enable video encoding directly from FFmpeg for the same, ultra-simple, highly powerful end-to-end solution. DSAs available from partner companies include Illumina, which integrates with GATK for genome analysis, and BlackLynx, which integrates with ElasticSearch for big data analytics, along with proprietary DSAs that are currently being utilized by our customers.

Xilinx also today announced it has launched a developer site that provides easy access to examples, tutorials and documentation, as well as a space to connect the Vitis developer community.  It will be managed by Xilinx and Vitis experts and enthusiasts, and will provide valuable information on the latest Vitis updates, tips and tricks.

The Vitis unified software platform—which empowers software developers with the efficiency of application-specific hardware architecture generated automatically from their software code, without new silicon—will be available for download for free next month. It is fully compatible with most Xilinx FPGAs, SoCs and MPSoCs released within the last decade. Versal ACAP support is available in early access and will be generally available in second quarter of 2020.

Information on the Vitis developer libraries

Photo caption: Xilinx Vitis™ is a unified software platform that enables a broad new range of developers – including software engineers and AI scientists – to take advantage of the power of hardware adaptability

Xilinx develops highly flexible and adaptive processing platforms that enable rapid innovation across a variety of technologies – from the endpoint to the edge to the cloud. Xilinx is the inventor of the FPGA, hardware programmable SoCs, and the ACAP, designed to deliver the most dynamic processor technology in the industry and enable the adaptable, intelligent, and connected world of the future. For more information, visit www.xilinx.com.

© Copyright 2019 Xilinx, Inc. Xilinx, the Xilinx logo and other designated brands included herein are trademarks of Xilinx in the United States and other countries.