Each successive generation of computing systems demands more total power and lower supply voltages than its predecessor, challenging power supply designers to keep pace with higher output current in a small area. At high power densities with low output voltages, the problem of heat dissipation rises to the top of the design priority list, especially for linear regulators in low noise applications. Paralleling LDO regulators can increase the supply current capability and mitigate heat dissipation, reducing the temperature rise of any particular component and the required size and number of cooling devices.

This article shows how to parallel the 3 A LT3033 very low dropout regulator (VLDO) for applications that require a current higher than 3 A, with the added benefit of spreading heat dissipation. The LT3033 can be easily paralleled—and current balanced—due to its built-in output current monitoring feature.

The LT3033 converts 1.14 V to 10 V input supplies to outputs as low as 0.2 V with load currents up to 3 A. The dropout voltage is only 95 mV at full load. Quiescent current is 1.8 mA during operation, dropping to 22 µA when shutdown. Programmable current limit and thermal protection give it the necessary robustness for high current, low voltage applications.

For Reference: 3 A, Single VLDO Application

Figure 1 shows the LT3033 delivering 0.9 V at 3 A from a 1.2 V input supply. A minimum of 10 µF very low ESR ceramic capacitor is required at the IN and OUT pins for stability. Adding a feedforward capacitor (CFF) from VOUT to the ADJ pin can improve the transient response and lower the output voltage noise. A 10 nF bypass capacitor from the REF/BYP pin to GND typically reduces output voltage noise to 60 µV rms in a 10 Hz to 100 kHz bandwidth and soft starts the reference. The minimum input voltage required for regulation equals the regulated output voltage VOUT plus the dropout voltage or 1.14 V, whichever is greater. A demonstration board is shown in Figure 2. 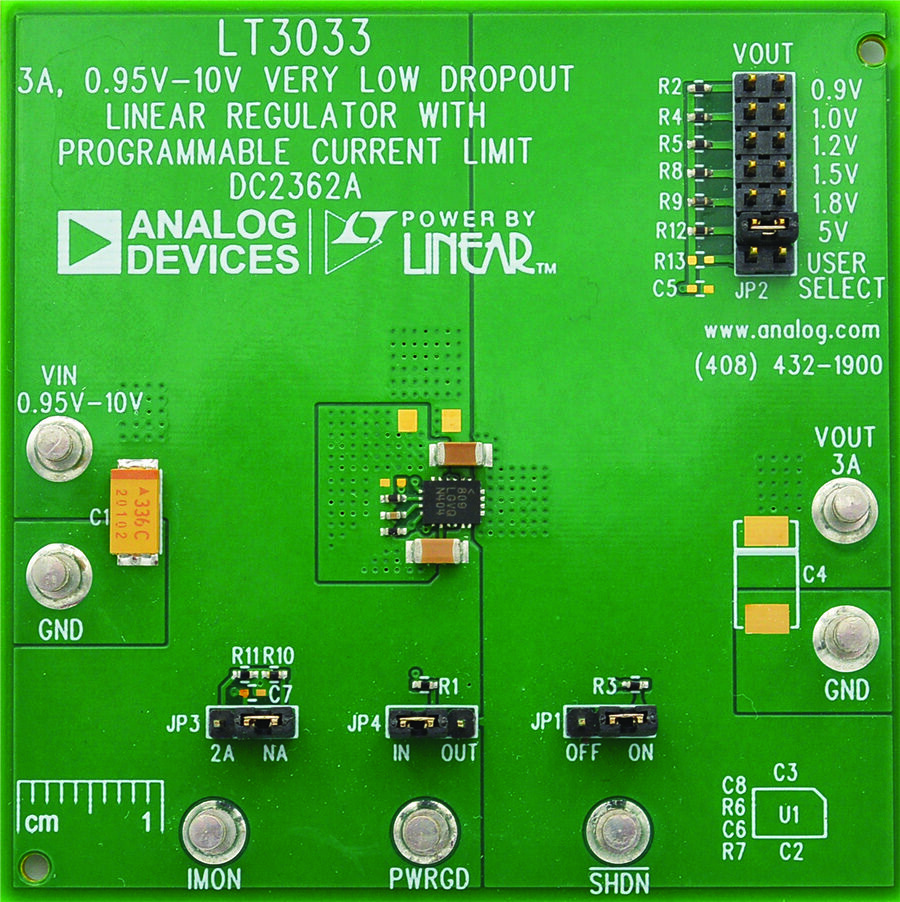 LT3033 provides an output current monitor by pulling the IMON pin to GND through a resistor. The IMON pin is the collector of a PNP, which mirrors the LT3033 output PNP at a ratio of 1:2650. The resistor voltage is proportional to the output current if it is not higher than VOUT – 400 mV.

Despite its tiny size, the LT3033 also includes a number of protection features, including internal current limit with foldback, thermal limit, reverse current, and reverse-battery protections.

Using Two LT3033s in Parallel for a 6 A Application

For applications that require more than 3 A, multiple LT3033s can be paralleled by taking advantage of its current monitor feature. Figure 3 illustrates two LT3033s in parallel together with two 2N3904 NPN devices to generate a 1.5 V, 6 A output. The individual IN pins and OUT pins are tied together, respectively. One LT3033 acts as master, controlling the LT3033 slave device.

Though this circuit can supply 6 A load current, current sharing accuracy is limited by the mismatch between two NPN devices—mismatches result in uneven heat distribution on the board. Higher current sharing accuracy can be achieved by using a matched monolithic transistor, such as the MAT14 from Analog Devices, to replace the two discrete NPN devices. The MAT14 is a quad monolithic NPN transistor that offers excellent parametric matching. Its maximum current gain matching is 4%.

Figure 4 compares the output current of each LDO regulator using discrete and matched NPN devices, respectively. Compared to the 2N3904, the MAT14 current mirror reduces the current mismatch from 5.3% to 1.6 %.

The paralleling circuit architecture is scalable to as many LT3033s as needed by extending the current mirror and adding slave LT3033 devices. Figure 5 shows a solution with four LT3033s in parallel using the MAT14 for current sharing. The thermal performance is shown in Figure 6. The four LT3033s reach temperatures ranging from 51°C to 58°C. Considering the voltage drop along the input trace for each part, the heat spreads evenly on the board, indicating balanced current sharing for this solution. Figure 7 shows the transient response of a 1.5 V output, 12 A power supply operating from a 1.8 V input. 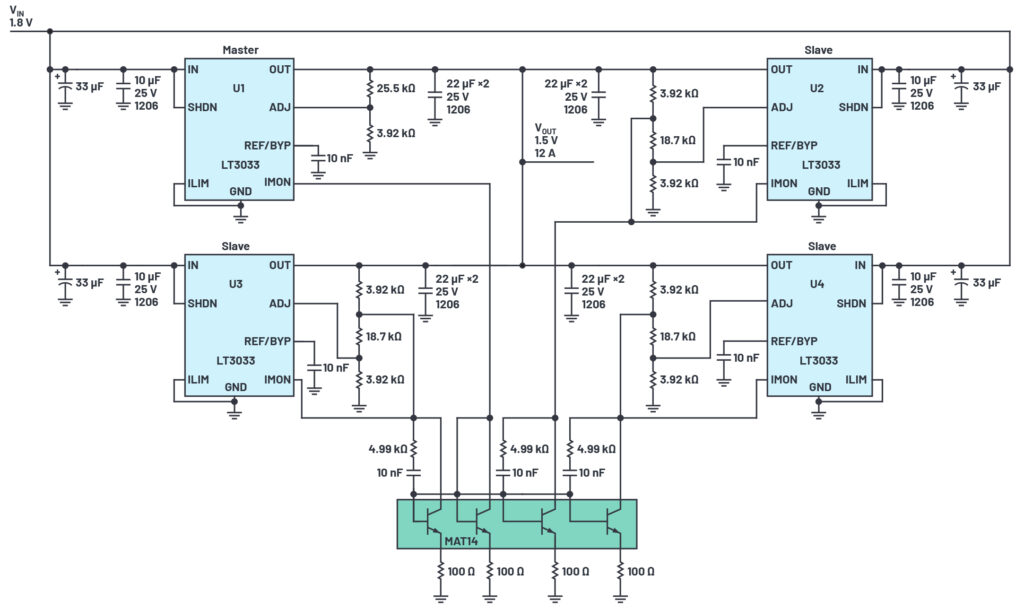 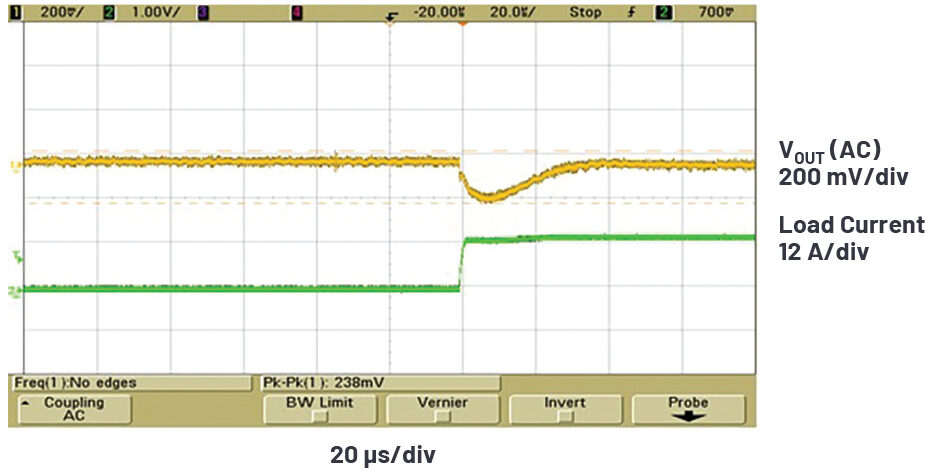 The LT3033 is a 3 A VLDO regulator in a 3 mm × 4 mm package. Multiple LT3033 VLDO regulators can be paralleled for high current applications because of their built-in output current monitor feature. With only 95 mV typical voltage drop at full load, LT3033 is ideal for low input voltage to low output voltage, high current applications, yielding comparable electrical efficiency to a switching regulator. Other features include programmable current limit, power good flag, and thermal limiting for reliable and robust solutions. Battery-powered systems benefit from low quiescent current and reverse-battery protection.

Huiyu (Molly) Zhu is a senior applications engineer in Analog Devices’ Power by Linear Group. She received her B.S.E.E. and M.S. degrees from Tsinghua University, China in 1998 and 2000, respectively, and a Ph.D. degree in electrical engineering from Virginia Polytechnic Institute and State University, Blacksburg, Virginia in 2005. He can be reached at molly.zhu@analog.com.

Fei Guo is a field applications engineer for Analog Devices, supporting the San Francisco Bay area’s broad market. His previous role was a senior applications engineer in Analog Devices, supporting the isolated power converter product line. Fei has an M.S. degree in electrical engineering from Santa Clara University. He has designed power converters for instrumentation, automotive, industrial, and communications products. Fei’s hobbies include hi-fi audio, photography, and playing with his two young kids. He can be reached at fei.guo@analog.com.

STMicroelectronics (NYSE: STM), a global semiconductor leader serving customers across the spectrum of electronics applications, has revealed details of its collaboration...
Sensors