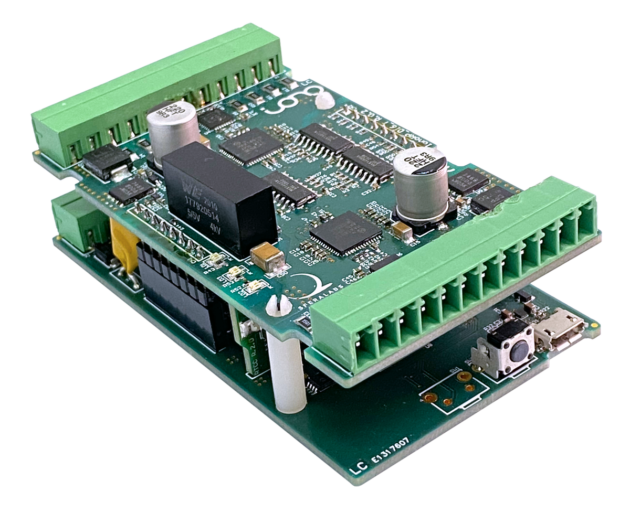 Sfera labs has extended its family of open industrial automation technologies based on the Raspberry Pi RP2040 microcontroller with the launch of a compact and powerful I/O module that combines a variety of digital and analog input and output lines with on-board memory and industry-standard interfaces.

The new module’s I/O front-end is based on two dedicated chips recently introduced by Maxim Integrated – the MAX22190, which is an IEC 61131-2 compliant industrial digital input device, and the MAX14912, which is a high-speed high-side switch/push-pull driver IC. Two MAX22190 and two MAX14912 devices are combined to allow for up to 16 lines that can be used for input or output. These I/O lines are galvanically isolated from the logic side of the Iono RP D16 module and the RP2040 MCU. Thanks to the protection built into the MCU, as well as the additional protection circuits designed specifically for the Iono RP D16, the module is extremely robust – offering long-term operational reliability in even the most demanding conditions.

Driven by the high-performance RP2040 MCU, complex embedded logic can be developed in software to drive the output switches at a rate of up to 200kHz in push-pull mode. Each output can deal with 640mA of load current, has open-load detection, and is protected from short-circuit, overcurrent and reverse current. The inputs are also very well protected and implement wire break detection.

The Sfera Labs Iono RP D16 leverages the vast community support of the RP2040, as well as powerful yet straightforward development tools and Raspberry Pi documentation. Control software development is simplified  thanks to the popular MicroPython and C/C++ languages and the convenience of drag-and-drop programming using mass storage over USB and the on-chip boot loader. The Iono RP D16’s internal 16MB flash memory can accommodate highly complex application logic, while a dedicated serial EERAM chip allows the storing of persistent information without wearing out the flash memory.

The Iono RP D16 has four low-current, digital GPIO lines and can accommodate optional features including a real-time clock with battery back-up and a secure element chip for encryption and safe storage of digital certificates. An earthquake sensor is also available which could be used, for example, to disconnect electrical loads or perform other safety-related automation tasks when an earthquake occurs.

By tapping into the Raspberry Pi RP2040 development ecosystem, engineers will be able to use the Iono RP D16 as the basis for creating exciting new automation and control applications. Furthermore, the firmware libraries specifically developed for the Iono RP D16 are all open source and may be freely accessed via Github – thereby helping to accelerate project completion. To support OEM requirements, Sfera Labs can provide custom casing and logo printing services.

For more information on the Iono RP D16 module go to: https://www.sferalabs.cc/product/iono-rp-d16